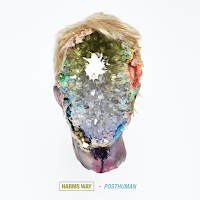 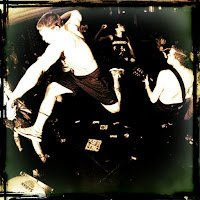 Chicago’s new hardcore kings are becoming a humongous force in their genre, and expanding their ravenous fan-base smashing their way into the realm of extreme metal. Only two tracks are streaming at this time (the lp is due out on February 9th ) but they are so godamned heavy, I had to pre-order immediately. As heavy as Xibalba, more catchy than The Acacia Strain, far sludgier than any goopy-soup out now and 100x groovier than the best nu-metal breakdown you’ve ever heard (because some were good, ya know).
This would sit at #1 or #2 on my year end list, however it’s the new year so I’ll have to remember for next Christmas.

Stuff to look at, laugh and/or wonder/dream of (if you ever get to have a day off from the coal mine)


Oak – Your Mess as Much as Mine – ( Hydrogenman Records) 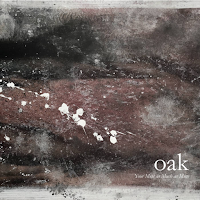 Dual screams mean double the anguish, and double the pain. Chaotic and propelling, a forward roll of grind with a schtickle of Dillinger Escape Plan madness. Oak shift without loosing control, or nary a glitch in tempo when slowed. The extreme duet of screaming vocalists carry this release into the arms of the folks who no will doubt love the disturbance it creates when turned up. 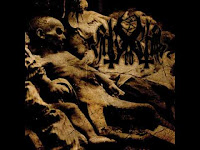 ’s Hak-Ed Damm play ultra-speed black metal that’s dizzying in velocity, and vocally. Different people have different voices and this is a different sounding vocal. A bit like the aliens in Mars Attacks when they die, a croaking, screeching death, the vocalist’s high range is odd. Not in a bad way, in an awesome one. They way something is different before it catches on and is mimicked until the end of time. The intros and samples crowd the music a bit, but the speed hits, before too long and it gets fast, really fast. 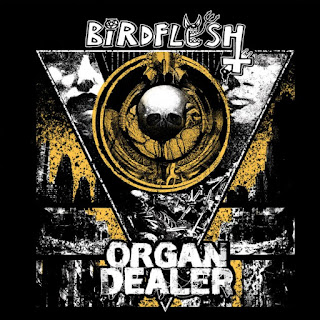 Water and earth nightmares ....all around.
Birdflesh / Organ Dealer – Split CD (Horror Pain Death Gore)
Birdflesh friggin’ rule. Their brand of grind is extremely infectious and fun, and any extreme metal fan in their right mind knows the deal with the crazy Swedes and this one is no different.  Philadelphia’s Organ Dealer is blazing fast pummeling your fucking brain in grind. Like, every other beat is a blast, and as Martha Stewart says, that’s a good thing.

Squalus – The Great Fish (Translation Loss Records) Nautical concepts surround this pointy-toothed, flesh-eater of a album. You can almost smell the splayed fish guts and saltwater and hear the circling seagulls trying to snatch a bit of dinner. Interesting take on doom and gloom, from the makers of GIANT SQUID, coincidentally. I almost feel the grey sky and cold wind of an oncoming nor’easter as I struggle to keep my feet dry. It’s like Ween’s The Mollusk played by Buzz*oven. 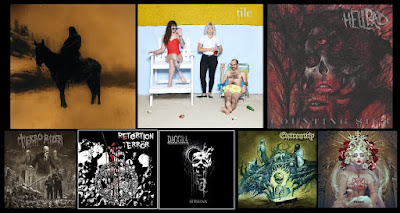 
2017 was a truly shitty year, so by default 2018 should've ruled in comparison, right? Eh, I guess. There might not have been as many death-related issues for me to deal with personally this year, so in that respect, 18 goes just a click above the shit storm 17 was. But, that in no way makes it a stellar year, things still suck, but time seemingly keeps me in a transitional stage and this is a good thing. There's always room for improvement.
2018 in metal was a decent year in extreme metal. Many long-awaited albums were put out by veterans, as well as many anticipated sophomore releases. Grindcore is back with a vengeance and rightly so. Death metal has had it's 3rd or fourth go-around with a ton of new top level bands. As it was last year, these are in no particular order (with the exception of #1 Terrorizer). 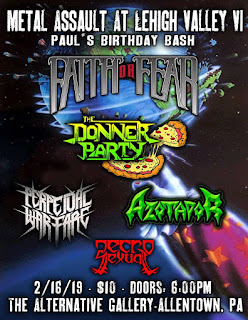 The 30 minute delay due to holiday resort- traffic, didn’t affect seeing all of the bands on Soulgrinder Zine’s Metal Assault 6 at The Alternative Gallery in Allentown, PA. This rager also served as host, Paul Caravisi’s birthday party and drew many friends who let it rip in the pit and all around the Gallery.

As we entered, we were intrigued at our first glimpse of Necrosexual.


Their corpse paint under the ominous red lighting gave them a very creepy ore, but the rock n roll black death metal they played has fun written all over it.

“Dead Sexy” rounded out their set and we thoroughly enjoyed the death growl/falsetto, duet/harmony (?)the bassist/vocalist and drummer DredRot belted out.

Azotador from La Paz, Bolivia hit the crowd with an awesome aray of thrash songs that had the mosh pit circleing.